Mr Adam Nuru, First City Monument Bank’s Managing Director, has gone on leave as the bank starts investigating his alleged adultery saga.
Adam Nuru, who allegedly fathered the two children of a married woman who worked at the FCMB with him.
After fleeing to the United States, where she is now seeking asylum, the woman, Moyo Thomas, nee Ojo, admitted her extra-marital affairs to her husband, Tunde Thomas. 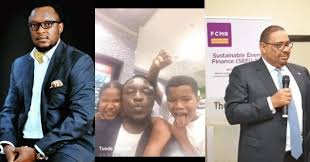 The shattered husband, who assumed all along that the two children of the union are his died of depression and a heart attack on 16 December, a few days before his family was introduced to another woman.

The movement to get Nuru dismissed is spearheaded by a party that has emerged, Justice for Tunde Thomas.

It has also given FCMB two weeks to sack Nuru for being mired in marriage and paternity controversies on ethical grounds.

In a statement on Tuesday, however, FCMB said the bank was aware of several reports circulating about Nuru through multiple media platforms; a former employee, Mrs Moyo Thomas, and her dead husband, Mr Tunde Thomas.

While this is a personal matter, the statement indicated that the tragedy of the death of Mr Tunde Thomas and the allegations of unethical behaviour required the board of the bank to review what happened, any breaches of its code of ethics and the adequacy of this code of ethics.

“This is already in development. The managing director offered to remain on leave throughout the duration of the study. This will ensure the sanctity of the review process,’ said the statement.

All its stakeholders were ordered by the bank to bear with it as it undertook this review and to respect the different families involved.